Agent Savills has calculated that current planning policies will lead to a shortage of 160,000 homes across the south of England by 2018. Local planners are simply not allocating enough space for new development in their areas, to meet expected demand.

The problem is, while each of them is relying on someone next door or nearby to take up the slack, every authority is playing the same huge game of NIMBYism – the Not In My Back Yard approach to housing development. Savills took the UK target of 240,000 new homes needed a year in England, a figure calculated by the Town & Country Planning Association, and drilled down to individual areas.

Thurrock, Dartford and Gravesham  are just three areas – all to the east of London – where sensible provision has been made. The majority of other local authorities are failing to meet demand, with Surrey, Berkshire and Buckinghamshire noted as falling considerably short of need.

“There is a real crisis looming,” warns Savills planning director David Jackson. “Local planning authorities need to act with urgency and in cooperation with neighbouring authorities to plan for the scale of housing delivery now needed right across the South of England.” 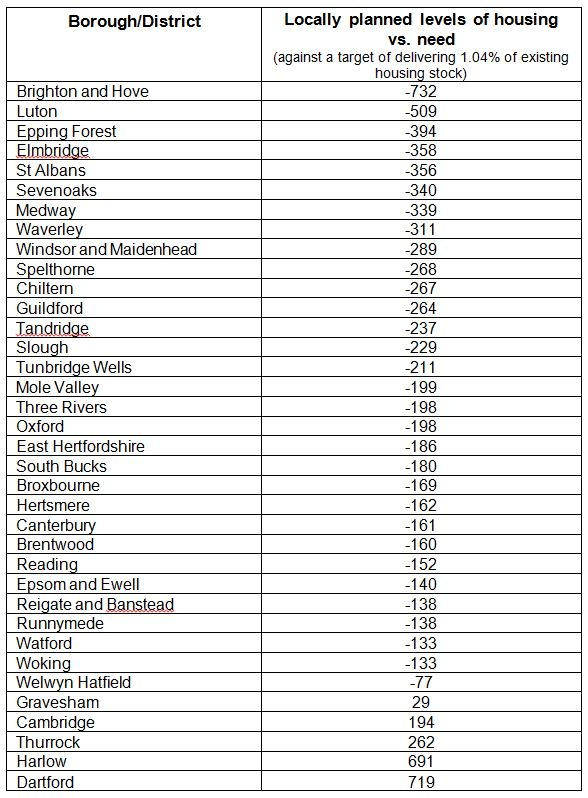 “The Chancellor’s recent commitment to a new ‘garden city’ in Ebbsfleet, with an initial 15,000 new homes is welcome, but it is a drop in the ocean – the equivalent of just four months’ requirement for housing in London,” says Savills planning director, Jonathan Steele. “New towns or Garden cities alone are not therefore a panacea. A long term commitment is required by government and other agencies to unblock infrastructure and other constraints to ensure that rates of housebuilding achieve a sustained and substantial increase.”

Savills has suggested local authorities need to form an “arc of cooperation” to help address the situation. The big problem is, with an election not too far off, there are no votes in housing developments – most people, if asked, would prefer not to see development near where they live.